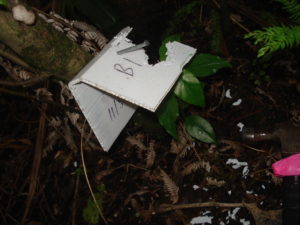 Chew card after a rat visit!

In September and October last year,  Whangārei residents were asked to take part in a pest mammal survey across the city. ‘Chew cards’ were given away to people at the Whangarei Growers’ Market and from the reception at the Whangarei District Council, Northland Regional Council, and NorthTec. Chew cards are small plastic corflute rectangles that have a lure, which is tasty to possums and rodents, inserted into the sides. They are folded and nailed to a post or tree and left for seven nights. The critters leave bite marks on the cards which allows them to be identified to species level (see picture).

In addition to the cards Whangarei residents stuck up in their backyards, NorthTec Environmental Management students also deployed them in other habitats across the city. In total, 375 cards were retrieved after the seven-night survey. While it was not feasible to put a card in every forest fragment, stream bank or backyard, enough data was collected to draw some conclusions on where some of the pest ‘hotspots’ are.

Rats, mice, and possums were all detected during the survey. In general, areas in or close to forests, forest fragments or waterways were where most pests were detected and a high proportion of the chew cards were interfered with (see map). This suggests that the relative abundance of these species is high in those areas. Whangarei showing where chew cards were deployed and what species interfered with them.

Not enough data from residential areas…

Unfortunately, not enough cards were retrieved from suburban backyards to get a very clear picture of pest distributions in areas away from fragments and waterways. However, we know that they will be in residential areas as several people who told us that rats were present in their properties returned un-chewed cards. This highlighted one of the limitations of using chew cards – that is, deploying a card in an area where a pest is present does not guarantee that it will be detected. This is especially true when pests have a patchy distribution, such as in residential areas.

One way to get around this problem is to deploy a greater number of cards in residential areas. This will result in a higher chance of detecting the critters and give a better picture of pest distribution across all of Whangarei. Accordingly, the Tiakina Whangarei team will repeat the survey over September and October this year and try to get more people involved.