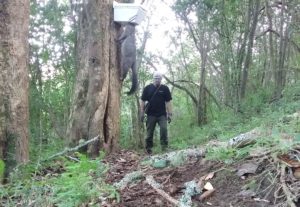 Even in lockdown, Phill Boswell is continuing to do his bit for our local birdlife, checking and setting rat traps on his daily walk from his Whangārei property.

Phill approached us at Tiakina last year to see what he could do to help and started with a couple of traps in his backyard and the surrounding forest near his home in Mackesy Road, between Whangārei city and Onerahi.

Over the next year, Phill managed to enlist support from enough neighbours in the Mackesy Road / Kissing Point area to establish 32 traps in his local area, 20 managed by Phill himself and another 12 in neighbour’s backyards. As of end of March 2020, Phill and his neighbours have just surpassed 300 pests removed, including 235 rats, 23 mice and 43 possums.

Phill is an awesome example of someone who just picked up the ball and ran with it. Yes, you need to be careful when you’re setting traps and yes, rats can be a bit smelly if you find them at the end of the week, but Phill is determined to keep up his trapping – even during lockdown – knowing what a difference it’s making.

“I’ve always loved nature. I love the birdlife, hearing tūī in the morning and coming home to fantails. Since I’ve started trapping there’s definitely more birdlife. That’s the reward. People see what I’m doing and stop to ask questions. I show them how to set the traps and log the catches via the app.”

The app – TrapNZ – is a nationwide initiative to record the location of traps being regularly checked and set by people like Phill, who want to do their bit to help our local environment thrive by reducing pests and allowing our flora and fauna to flourish. Over time, the Trap NZ app is building up a nationwide picture of our trapping community, with mapping that will highlight progress and data collection that will record trap, bait, monitoring and biodiversity outcomes. Tiakina Whangārei is a registered project on TrapNZ that anyone in Whangārei can join.

Not everyone is tech-savvy enough to use the app, so with one of Phill’s retired neighbours, any catches are recorded in a notebook which he leaves on his porch for Phill to check and then update the app. 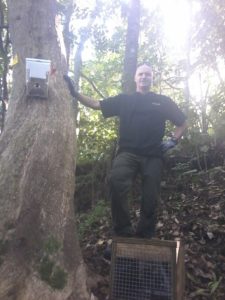 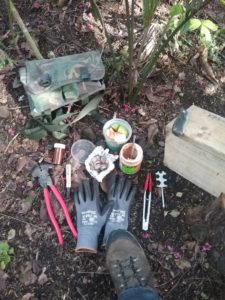 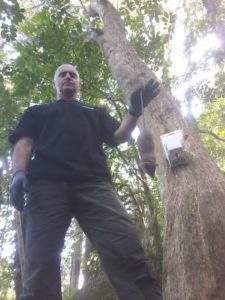 “It takes me about an hour, and I clear them once a week. When it comes to rats you have to be careful. Even the dead ones spread diseases. I bury them but never close to a waterway or in a wash off area. That’s important.”

Phill now sees trapping as a part of his weekly routine and finds it incredibly rewarding.

“I guess it’s a connection to my surroundings, the land and nature that makes me do it. As you get a bit older, a bit wiser you see things differently and appreciate nature and the environment more than ever before, so you want to do what you can.”

When asked what it might look like if we all did our part, Phill is quick to respond.

“I want to see and hear what it used to be like, before the pests. I would love to hear what Joseph Banks, Captain Cook’s botanist, described in 1770.”

“This morn I awoke by the singing of the birds ashore…the numbers of them were certainly very great…their voices were certainly the most melodious wild musick I have ever heard, almost imitating small bells but with the most tuneable silver sound imaginable.”